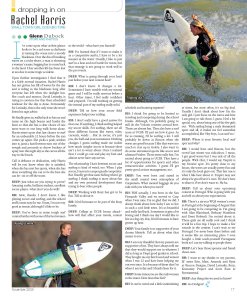 By:Darlene Conolly
All Photos:Glenn Dubock
There might not be a large number of female surfers in the waters north of Southern California but the Santa Barbara and Ventura area has been pumping out some high-quality girls recently. Rachel Harris of Carpenteria in SB is just one of them.
Not only has her presence on the amateur competition circuit been gaining strength over the past few years, but she’s recently moved up the rankings and started dabbling with the WQS. If her powerful, controlled style has any say in the matter, Rachel Harris will soon become a staple name in heat draws alongside the best female surfers from around the globe. But first, Surfline Women wanted to find out who this teen is and where she’s coming from. But with just 10 days until her 18th birthday, here’s what her horizon looks like.

HOW DID YOU GET STARTED SURFING?
I started when I was 12. It was something to do over the summer since we lived close to the beach. My mom signed me up for this lifeguard surf class and I really liked it. Then I got my own surfboard.

WHAT’S THE HARDEST THING ABOUT BEING A FEMALE SURFER IN SANTA BARBARA?
I don’t know. I don’t really notice a gender difference really, but obviously there are a lot less girls so it’s harder to find someone to surf with. But as far as getting waves, I rarely find any problem catching waves.

DOES THE LOW WATER TEMPERATURE IN YOUR AREA MAKE IT HARD TO SURF SOMETIMES?
It’s cold and there are definitely some days when I’m not excited about going out and it helps to have a good wetsuit but it’s not as cold as Santa Cruz so I try to think about it like that. I try and keep at least one other dry suit so I’ll be ready for the next session.

WHAT IS ONE ASPECT ABOUT YOUR SURFING THAT YOU’RE WORKING TO IMPROVE ON RIGHT NOW?
I guess my mental game because, before, I’d get really nervous before heats so I’m trying to stay calm and trying to get to where I’m surfing my best all the time.

WHERE DO YOU SEE SURFING TAKING YOUR LIFE?
Hopefully letting me go around the world, see a bunch of places and meet a lot of cool people.

WHAT WOULD YOU WANT TO DO IF SURFING DIDN’T END UP WORKING OUT AS A CAREER?
I’m trying to decide that right now, actually. I got an acceptance letter last month and I’m going to UC Santa Barbara. I’m trying to figure out what I want to major in, probably like mechanical engineering or biology. Now I’m starting to get everything set up for that.

WHAT’S SOMETHING INTERESTING THAT MOST OTHER SURFERS WOULDN’T KNOW ABOUT YOU?
I can make pottery on a potter’s wheel. I take it as a class at school and I like it a lot. One day I’d like to buy a wheel and start making stuff at home, like bottles and teapots or random stuff.

WHEN SANTA BARBARA GOES FLAT, IT GETS REALLY FLAT. SO WHAT SORTS OF ACTIVITIES DO YOU DO TO KEEP ENTERTAINED DURING THOSE FLAT SPELLS?
I play guitar a lot. It’s something I do to keep busy. I also play soccer a lot to stay in shape but the season just ended so I’ll have to find something else to do. And I skate a little bit, too.

LET’S SAY YOU COULD CHOOSE TO MOVE ANYWHERE IN THE WORLD RIGHT NOW. WHERE WOULD IT BE?
(After a lot of contemplation) I guess I’d like to live in Australia. I went there like a month ago to do the WQS at Margaret River and it’s really unique. Plus, there are lots of waves to surf. I think West Oz is pretty cool, there’s a lot less people around and the waves are really big and powerful.

WHAT’S SOMETHING YOU ENJOY ABOUT BEING A SURFER?
What I like best is that you can go out and forget about everything on land. It’s just like a way of escape.

Rachel as the only woman surfer left in the Red Bull Riders Cup is going to be featured in a documentary Red Bull is producing on the event.